So…much…time…passed…since…last…post…! Seriously though, I can’t believe that it’s April ALREADY! And I’m getting married in less than 2 months. It’s crunch time! Luckily, things are getting done. Stuff is happening. Plans are starting to come together. But yeah. Still lots to do! Of course, I’ve managed to squeeze in time for crafting, but not much! Some of the crafts I’ve worked on lately will actually be used for the wedding, and I have more in mind…whether or not they actually get done before the wedding is another story, haha. Just have to buckle down and make it happen. Good thing I have fiancée to help me out with the hard stuff (stuff requiring power tools), and awesome maid of honor/bridesmaids to help out with the fun/cute stuff. 🙂

So, first craft project…well it has nothing to do with the wedding, haha. This was actually a Christmas present for my future mother-in-law. Fiancée made a cookbook holder out of wood, and I decoupaged it with some of his grandmother’s old handwritten recipes (copies of course, wouldn’t dream of touching the originals!). We were very sneaky about this…we asked for some help from fiancée’s aunt & cousin over Thanksgiving – they asked his mother if she had any of grandmother’s old recipes for a project they were working on, then they emailed us the scanned copies they were able to get from her. Yay, teamwork! Anyway, I think it turned out really well. Could also double as a tablet holder if you’re like me, and get a ton of your recipes from Pinterest. 🙂 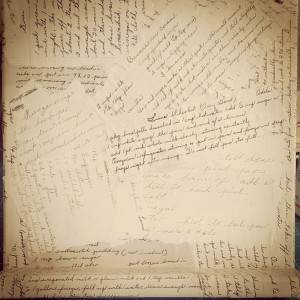 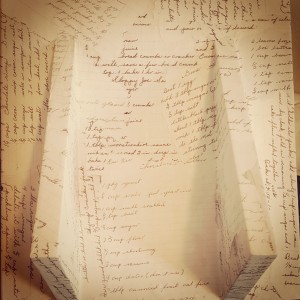 Second craft project…also nothing to do with the wedding! I mean I guess we could use it, but…I don’t think we’ll need it on June 4th in Texas, haha. It’s a coat rack! My awesome mom had this really great old porch column that I just fell in love with, and simply had to put in my living room. We also needed a coat rack. Win win! Fiancée and I bought four shelf brackets from Lowe’s, painted them turquoise (my new favorite color), and attached them to the bottom of the column to use as the feet. Now, we had a little trouble with the hooks. We just couldn’t find any that we liked in Lowe’s, and I knew if we had to go order some online and wait for them to come in, the chances of us actually finishing the project within a timely manner were…slim to none. We had momentum going that weekend, and just needed to get it all done then. So we made a detour to the plumbing section. We ended up using brass pipe fittings as the hooks, and I LOVE them. This is probably my favorite project in my house right now. 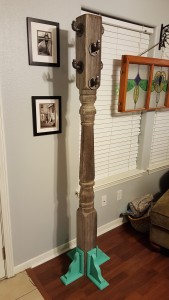 Third craft project: Another quilt!! And this time I wasn’t even shanghaied into doing it! I went to Louisiana with my mom in January for another craft retreat that she was doing with her friend, Hannah, and I decided I could probably piece another quilt while I was there. Hannah was enormously helpful (yet again), and she even quilted it for me (it’s like she likes me or something)! Honestly though, I’m super stoked about this one. It’s almost ready for me to put on the bed, my mom just has to teach me how to bind it first. I’m so excited! 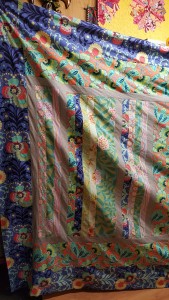 Alright, these last two projects were actually made specifically for the wedding. My maid of honor and one of my bridesmaids came over for a girl’s night a few weekends ago – we ate pizza, drank wine, and decoupaged a whole bunch of soup cans! How cute are these? We’re going to use them as flower vases on the tables, and I just couldn’t be happier with them. They were so easy too! A friend of mine provided the soup cans, and we just washed them out really good, then glued scrapbook paper on them with mod podge. Super easy. 🙂 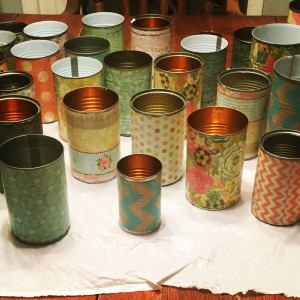 And the last one for now…giant Jenga! Since the wedding will be outside, we wanted to provide some entertainment options for guests. I saw some Pinterest posts about DIY giant yard games, and talked fiancée into helping me make some of them. We made this out of 2x4s. Each piece has been sanded and stained. I was definitely wishing that Jenga didn’t have 54 pieces about halfway through this project, haha. But it works! We’ve already played a couple of games…I don’t want to talk about who won, but let’s just say it wasn’t me. 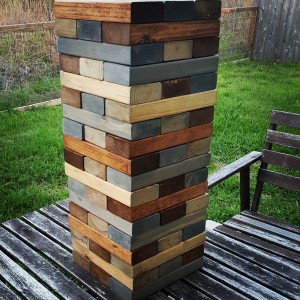 Alright, well that’s it for now from me. So long, and…eeeep! June is right around the corner!