I know, I know…it’s been a while. Again. Sorry ‘bout that. What can I say though? Guess I’m just kind of bad at keeping up with things sometimes. So, what have I been up to for the last few months? Oh you know, the usual. Folding books, working at my actual job, making the occasional crossword, and of course, spending time with boyfriend, family, and dog. Yup, life has been pretty good lately, and busy enough to keep me happy. I was even able to squeeze in a (much needed) trip to the beach with boyfriend & friends last month…kind of wish I was still there. I definitely think I could get used to the island lifestyle…I mean you know, if I just had to. 🙂

I’ve worked on a few other craft projects as well, some of which were *ahem* borrowed from Pinterest. Here’s one that I enlisted boyfriend & other roomie to help put together for our back patio: Wine Bottle Tiki Torches! 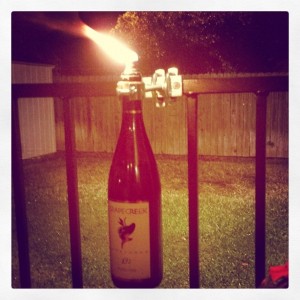 I have to admit, the creation process on these was more complicated than I first anticipated (mainly because after a few failed trips to Home Depot, Lowe’s, etc., I was forced to eventually buy some of the supplies online). I do really like the end result though, and they weren’t that difficult to make after all.

Here’s another project that was extremely inexpensive: Paint chips mural! 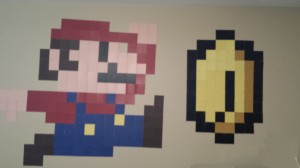 I put this up on a wall in the boys’ computer/video game room, and I think he definitely adds a certain ambiance. I literally only had to spend about $5.00 on this, just for the poster putty I used to adhere the chips to the wall. I got the chips from Lowe’s, and I did offer to pay (since I needed so many), but they let me just take them. Thanks, good people of the Lowe’s Paint Department. 🙂

The final project that I’ve done lately, is this decopauged table (also for the patio…it’s a great patio!). 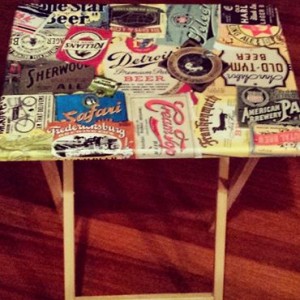 I just did a google image search for vintage beer labels, printed them out on regular paper, then mod podged them to the surface of a TV tray/table from Wal-Mart that was under $10.00. Not too bad – I think it turned out nice & colorful, which is really what I was going for.

Well, that’s pretty much all that I’ve got for now…have to do some traveling for work over the next month or so, which means that there will be very little time for crafting. Good thing I love my job. 🙂

Oh, I almost forgot! I’ve added another section in my website for recipes – right now I just have a few that I really like posted, but I promise I’ll continue to add more as I find them/actually write them down.

“So long, and thanks for all the fish”!