Here’s another blog post about something creative! I learned how to decoupage several years ago, and lately I’ve had the urge to try it again. I started up again with a fairly old, extremely standard black bookcase that has been in my room for a couple of years now – no pics of that yet, as it’s still a work in progress. I’ve decided to only do the inside of the piece, so just the shelves, backboard, and inside walls. Hopefully it’ll turn out pretty nice – I’ll definitely post some pics when it’s finished. 🙂

I do have a pic to share now though, of a much smaller project that I finished just last night. It’s my boyfriend’s lamp, and I’ve had the displeasure of occasionally looking at it over the past 10 months – I have to say, it was a real eyesore. It basically looked like something that the early 90’s disgorged onto said boyfriend’s bedside table. In all fairness, it actually did (in all of it’s shiny black & gold glory) go with boyfriend’s equally frightful straight-from-the-90’s decor in the house he’s currently renting. I will only say one word about that. Wallpaper. *shudder*

Okay, now back to the lamp. Boyfriend didn’t ever really experience the horror that it has inspired in me, because well, he’s a guy. He really only wants one thing from his lamp. Light. This monstrosity did provide a decent enough light source, so it was allowed to stay. That being said, I quickly realized that he obviously didn’t care what the lamp looked like at all, which inspired my bright idea. Ha! Get it? Bright idea, because lamps are…bright. No? Nobody? …*crickets*…
Ahem. Right. So I decided to (with his permission of course) decoupage the lamp. I know, that had a twist ending that nobody saw coming, right? Anyway, I think it turned out really well! I tried my very hardest to make it more masculine themed, which is quite frankly kind of difficult to do with anything that you’re decoupaging. Mainly because decoupaging just seems so…girly. I’m fairly confident that I succeeded though, and here’s the pic so you can judge for yourself. I honestly wish I had thought about it enough to take a before pic as well, so it would possibly be a little more impressive to you. 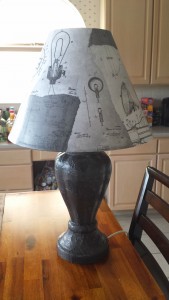 For anyone who really likes the look but has no experience with this particular craft, just message me – I’d be happy to give you some pointers to get you started. All in all though, I think that decoupage is a really fun and easy way to completely change the look of something, for very little money. Seriously. Very little money.

So long for now, and may you never have an unsightly light fixture!